Canada, a favoured member of the Commonwealth, was the only realm to hold its own national commemorative ceremony following the late Queen’s state funeral in the U.K. — a testament to the close relations between Canada and its former sovereign.

Throughout her reign, the Queen routinely referred to Canada as “home.”

Queen Elizabeth was eulogized by former prime minister Brian Mulroney, who had a positive working relationship with the monarch during his nearly nine years as head of government.

Mulroney said the Queen felt “a special, very deep love for Canada — its diversity, its geography and its history,” a genuine affinity for a country she regarded as “the greatest one in her realm.”

The Quebec-born former prime minister said he thinks Canada is as successful as it is now because of the stability of our Westminster system of parliamentary democracy, where the constitutional monarch is central.

While some other countries are beset by war, violence and political coups, Canada stands as a beacon of peace and strength, Mulroney said.

“We are largely unaffected by the major spasms of social and political discontent that have destroyed so many countries around the world. This didn’t happen by accident. The system of government chosen by our founders had much to do with it,” he said.

“Today, our system might appear anachronistic to some — I understand that — but to others, who constitute, in my judgment, the overwhelming majority of Canadians, the role of the monarchy and in particular the irreplaceable role played by Her Majesty for 70 years was absolutely indispensable,” he said.

WATCH | Brian Mulroney gives eulogy at ceremony for the Queen in Ottawa:

Mulroney also pointed to the role the Queen played in helping to end apartheid in South Africa.

He said that triumph “would never have taken place in the Commonwealth had it not been for Her Majesty’s discreet, brilliant and generous guidance and unerring instinct for the victory we all sought.”

Former governor general Adrienne Clarkson, who served as the Queen’s representative between 1999 and 2005, said Canada came of age during her 70-year reign, becoming a freer and fairer country on her watch. 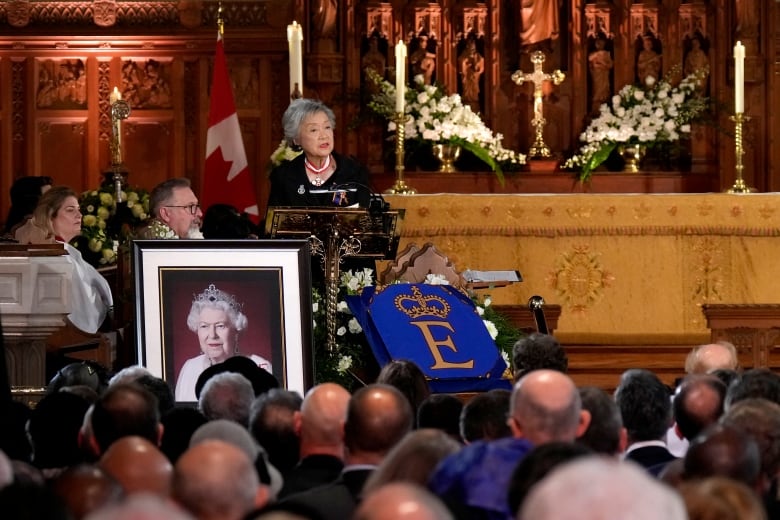 “The Queen, as the representative of the Crown, was the symbol of democratic legitimacy,” Clarkson said.

Recalling the Queen signing the Constitution Act in 1982, Clarkson said the monarch “signed over to us what is rightfully ours — our human rights, our human freedom.”

Clarkson recounted a meeting with the Queen during the Golden Jubilee celebrations in 2002. “Suddenly focusing on me, she said, ‘I shall never abdicate…. It is not our tradition. Although, I suppose if I became completely gaga, one would have to do something,'” Clarkson said to chuckles from the congregation.

This moment, Clarkson said, was a reflection of her unwavering dedication to public service.

“She held the course to the end — focused, dutiful, calm, the essence of equanimity. Like her remarkable mother and her heroic father, her life was guided by intention,” Clarkson said.

Adrienne Clarkson speaks at ceremony for the Queen in Ottawa:

Clarkson remembers several interactions with the late Queen Elizabeth throughout her career as Canada’s Governor General.

Christ Church Cathedral, an Anglican church in Ottawa’s downtown core, was chosen as the site for this service because of the Queen’s formal position as “defender of the faith” and the head of the Church of England, the mother church of the worldwide Anglican Communion.

The cathedral’s choristers sang Psalm 23 (“The Lord is my shepherd …”), which is often read or sung at funeral services because the content is comforting to many Christians during times of grief, and Donald Booth, the Canadian secretary to the King, read a passage from the Bible, Philippians 4:4-9.

Queen’s funeral felt like ‘the turning of the page into a new era,’ says former PM Campbell:

Queen’s funeral felt like ‘the turning of the page into a new era,’ says former Prime Minister Campbell

Former Prime Minister Kim Campbell was part of the Canadian delegation attending the Queen’s state funeral in London. She reflects on the Queen’s legacy and what she calls a sense of ‘the turning of a page into a new era’.

The Queen, a devout Christian, routinely celebrated other faith traditions during her annual Christmas messages — one of the few times Commonwealth subjects heard directly from the monarch.

“We pray for the leaders of the world, may they continue to work towards the vision of Elizabeth II, devoting their lives also to the common good. Remembering Elizabeth II’s service and her dedication to the cause of peace,” Bélisle said.

The day began with a memorial parade through the streets of downtown Ottawa led by members of the CAF and the Royal Canadian Mounted Police, two services that were also well represented at the funeral in London and Windsor, England.

Members of air force, army, navy and special forces were accompanied by the Canadian Armed Forces Central Band as they marched past the war memorial and Parliament Buildings in Ottawa en route to the cathedral.

At LeBreton Flats, across from the Canadian War Museum, a 96-salvo salute — one shot for each year of Her Majesty’s life — was fired while the parade marched the city core.

While Ottawa faced inclement weather and rain throughout most of the morning, thousands of onlookers lined Wellington Street, the road that runs in front of Parliament Hill, to pay tribute to the Queen and her remarkable seven-decade reign.

The crowds grew after British ceremonies concluded, as locals flocked from their TVs to the streets to take part in the commemorative ceremony.

NDP Leader Jagmeet Singh reflects on Queen Elizabeth’s legacy and his hopes for the reign of King Charles.

Sandra Tisch and her husband, Rob Semancik, drove eight hours from Oldcastle, Ont., near Windsor, to take in the event.

“It’s been an emotional 10 days,” said Tisch, who brought flowers to drop at the British High Commission and a statue of Queen Elizabeth.

“She gave her life to her country, and I think she did a lot of good.”

Tisch also got up early to watch the televised funeral service in London.

Alexandra McLean, the descendant of a British war bride who married a Canadian soldier, said she came out to commemorate the work of the Queen and what it symbolizes to those who took up arms in her service.

“We’re mourning our grandmothers as well,” she said.

“We are respecting the head of state, constitutional democracy [and] the woman who served us very well, and we’re honouring the people who loved her, who saw in her service their own service and what gave them strength for that service.”

The late Queen, as Canada’s head of state, served as commander-in-chief of the CAF and is revered in military circles.

Chief of the Defence Staff Gen. Wayne Eyre, Canada’s top soldier, said Monday the Queen was a “role model” for military personnel and a “real sterling example of service above self, humility, determination, and she led an incredible life of giving to others.”

More than 600 people were on hand for the ceremony officiated by the Very Reverend Elizabeth J. Bretzlaff, dean of Christ Church Cathedral, and the Right Reverend Shane A. D. Parker, bishop of the Anglican Diocese of Ottawa.

Most members of the federal cabinet, MPs, senators, Ontario Premier Doug Ford and members of the diplomatic corps were in attendance as Albert Dumont, the cathedral’s Algonquin spiritual adviser, paid tribute to the Queen with a poem. Musicians played at gaps in the religious service.

“In the land of the red Maple Leaf, the sorrow of many citizens fills the skies,” he said. “The tears, the prayers of her admirers take flight, like the geese of spring and autumn, making their way to the Queen Mother, who waits to hold her daughter close to her bosom once again.”

Baik played Nimrod, from Edward Elgar’s Enigma Variations, which is usually associated with solemn occasions. It was performed at Westminster Abbey in 1953, just prior to Her Majesty’s coronation service, and has since also been commonly affiliated with the Queen.

Ottawa’s English poet laureate Albert Dumont, who is also an Algonquin spiritual adviser, joins Rosemary Barton Live to talk about the memorial service being held in Ottawa on Monday to honour the Queen. He offers an early glimpse of his tribute to Her late Majesty.

Reno performed Ceux qui s’en vont, and Wainwright, who has performed for the Queen before, sang Hallelujah.

After the ceremony, the bells tolled as the parishioners filtered out.

There was to be a flypast by CF18s in the “missing person” formation, but poor weather forced the military to call that down shortly before the ceremony was to begin.

The Vintage Wings of Canada, composed of Second World War Spitfire and Hurricane aircraft, were also scheduled to fly over Parliament Hill and the cathedral, but that was cancelled because of low cloud cover.

J.P. Tasker is a journalist in CBC’s parliamentary bureau who reports for digital, radio and television. He is also a regular panellist on CBC News Network’s Power & Politics. He covers the Conservative Party, Canada-U.S. relations, Crown-Indigenous affairs, climate change, health policy and the Senate. You can send story ideas and tips to J.P. at john.tasker@cbc.ca.

With files from The Canadian Press