Former President John Agyekum Kufuor has denied the blazing media reportage suggesting that he had tipped the candidature of Dr. Mahamadu Bawumia as flagbearer of the governing New Patriotic Party going into 2024 elections.

The former president at the just ended Father’s Day, commended Dr. Bawumia for his outstanding contribution, loyalty, and dedication to the NPP.

This statement from the stateman many said was his endorsement of the Vice President for his 2024 NPP flagbrearership bid.

“The attention of the Office of Former President John Agyekum Kufuor has been drawn to erroneous reportage in some sections of the media, especially on social media, to the effect that President Kufuor has endorsed an aspiring candidate for the NPP flagbearership over several others who have expressed interest to contest in the race.” – the statement said

“The office wants to emphatically deny that any no such endorsement took place on the said occasion and bemoan the fact that what transpired has been seriously misconstrued,” the statement signed by Dr. Kwabena Osei-Adubofour, the aide to the former president clarified

“The President believes that any of those mentioned, when selected by the party to be the flagbearer, would be able to discharge the work of the flagbearer very firmly and effectively.” – the statement added

He emphasized that the contest should be “devoid of coercion and machinations so that the eventually selected nominee, coming out of the uncompromised freewill of voting delegates, can easily command the support and respect of all party faithful, and indeed, other Ghanaians sympathetic to our cause towards ‘breaking the eight.’

The governing NPP is scheduled to hold its National delegates conference to elect a flagbearer to lead the party into the 2024 polls.

Many names have since popped up for the race including Kennedy Agyapong, Alan Kyerematen, Akoto Osei, and Vice President Bawumia with only the Assin Central MP Agyapong officially declaring his intentions to contest. 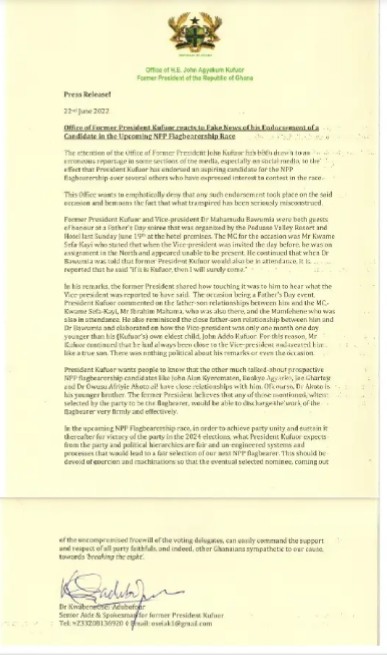