The Chief Executive of Ghana Investment Promotion Center (GIPC), Yoofi Grant, has urged the Ghanaian diaspora in Canada to return home and contribute to the development of the country through long-term investments. 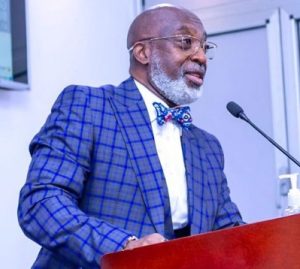 He was speaking at the opening of the Ghana Canada Investment Summit (GCIS) in Toronto Canada, on Thursday, September 15, 2022.

The summit, which is essentially a diaspora roadshow, was organized by GIPC to showcase investment opportunities in Ghana to the Canadian diaspora, with the view to attracting them to return home and contribute to the forward march of the country.

“It is our belief that by the close of this summit all of you will feel attracted to the idea of coming back home not necessarily to stay but to help make Ghana stronger and better through strategic partnerships and long-term investments,” he stated.

Yoofi Grant noted that the diaspora is very critical to the development of Ghana, saying that its power cannot be assumed.

He explained, for instance, that annual inward remittances from the diaspora to Ghana is around US$4.5 billion, which is higher than foreign direct investment, larger that the entire aid Ghana has received from Canada since 1957 (US$2.5 billion) and also larger than any money Ghana has borrowed in a year in recent times.

This, according to him, makes the diaspora a “powerful tool de force” that can contribute to the growth of Ghana’s economy in a very significant way.

He noted, therefore, that the focus of the summit is to strategically engage the diaspora in the debate and development of Ghana, rather than just holding a talk shop, so that the contribution of the diaspora to the economy will strategically channelled into growth areas.

On the contrary, major imports from Canada into Ghana, such as heat, cars, used clothing, excavation machines and poultry increased by 8.97%, which clearly shows that exports from Ghana to Canada has been growing at a higher rate than imports from Canada.

“Currently, the two-way merchandize statistics between Ghana and Canada has reached over US$475 million, representing a 71% increase over the figure recorded in 2020,” he said. “Clearly, trade between the two countries is growing.”

He therefore charged Ghana’s High Commissioner to Canada to build and fortify the relationship between the diaspora and local businesses to ensure that volumes and value of trade continue to grow.

“We also brought some private sector businesses from Ghana to build more strategic partnerships to ensure long-term and far-reaching mutual benefits for both countries,” he said.

He stated that Ghana is known to be a resource-rich country, having gold, manganese, bauxite, and even lithium, with agriculture being its bedrock and driving industrialization.

But the country, according to him, is today the spearhead of Africa’s economic and financial reformation and growth, so the country is well positioned as the investment destination of choice on the country.

“That is why we say – come grow in Ghana – grow with Ghana,” he added.

In crystalizing the reasons why Ghana is the best investment destination in Africa, Yoofi Grant said described Ghana an opportunity-rich country.

He explained that there are clear and deliberate government strategies and incentives earmarked to boost the manufacturing sector to process more of the raw materials locally, with the One-District-One-Factory policy being the foundation of an ambitious industrialization vision.

Yoofi Grant said government is also embarking on significant infrastructure projects like the building of railways and 11,000 kilometers of roads across the country to connect the dots between farming and industrial communities, all in the bid to attract investors from the diaspora to take advantage of the opportunities.

According to him, government is also modernizing the economy with digital technology to ensure seamless connectivity between producers, manufactures and consumers. He mentioned the Ghana Card and Digital Addressing systems as key infrastructures that make it easy to know and to find people for meaningful conversations.

“But the whole plan is to make government’s interaction with the citizens seamless and fast without human intervention and agency cost,” he said.

He also touched on opportunities in tourism, particularly with the “Year of Return” being a springboard into “Beyond the Return”, where Ghanaians and Africans in the diaspora are expected to return home not just for tourism but for business.

The GIPC Boss also explained government Planting for Food and Jobs as a policy that opens up opportunities into the agricultural sector, given that 60% of the land in Ghana is agricultural land and a lot of it are waiting to be fully cultivated.

He said investments into energy, which is critical to all the other sectors, has been very significant and there is enough energy to power any level of investments in the country.

The summit is being attended a number of state official from Ghana, including the Ministers of Foreign Affairs, Shelly Ayorkor Botcwhey; of Communication and Digitalization, Ursula Owusu-Ekuful; of Information – Kojo Oppong Nkrumah and of Tourism and Culture, Dr. Awal Ibrahim Mohammed.

Some members of the business community from Ghana are also in attendance to promote their specific products and services and the partnership opportunities they have for their counterparts in the diaspora.

Watch day one of the summit below: