This project is part of the 58 road projects being constructed in the Volta region, out of which 129 kilometres have been completed.

Engineer Oliver Acquah-Techie, Chief Executive Officer of First Sky Construction Limited, the contractor of the project, noted that the construction of the road, which was awarded in September 2021 is progressing according to schedule.

Interacting with the President on Monday, 12th September 2022, the Volta Regional Director of the Ghana Highway Authority, Mr. Eric Dorsu said the 45-kilometre Asikuma-Have stretch is scheduled to be completed in September 2023. 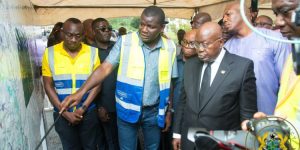 Touching on other projects on the Eastern corridor he said, “41 kilometres out of the 53 kilometres of the Have-Hohoe stretch which is being done by Greenhouse Construction has already been completed.”

“22 kilometres of the 30-kilometre Hohoe to Jasikan, and the entire 56-kilometre Jasikan-Dodo Pepeso section has also been completed and commissioned by Vice President Mahamudu Bawumia last week. Work is steadily ongoing on the Nkwanta-Kpassa and the Oti-Damongo sections as well.”

The 696km stretch begins at Tema in the Greater Accra Region to Kulungugu in the Upper East Region. It is the shortest route linking the northern part of the country to the south.

Amongst the roads completed include 21 kilometres of asphaltic overlay of selected roads in Hohoe and Kpandu Municipalities. 15.6 kilometres of bitumen surfacing of Akwettey-Adaklu -Waya Road; 20 kilometres of Bitumen Surfacing of Yorkitikpo-Kpoviadzi-Trepe Road; and the upgrading of 9.7-kilometre Liati Agbonyira -Fodome Ahor Feeder Road. 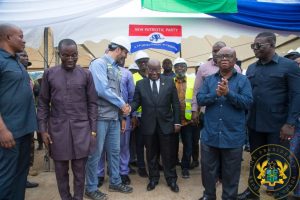 The Dualisation of Ho Main Road (10km) between Sokode Gbogame and Civic Centre, the first major dual carriageway in the Volta Regional Capital, is 85% and is scheduled for completion by the end of 2022.

Work on the 39.3km Asikuma Junction – Kpeve section of the Eastern Corridor Road is 26% complete and planned to be completed by December 2023. It is expected to be completed ahead of schedule. The contractor has also been instructed to work on the 6km gap between Kpeve and Have.

The government is also working towards the commencement of works on the Volivo Bridge and approach roads. Work is expected to commence by the first quarter of 2023.

Tendering processes are also ongoing for the 39.2km Dufor-Adidome-Asikuma Junction and the 23.9km Asutsuare Junction – Aveyime Roads, which will serve as approach roads to the Volivo Bridge. The project is to be funded by the African Development Bank, with work expected to commence by January 2023.